Bill Costley, one of the duo behind hospitality company Costley & Costley, received an Honorary Doctorate from UWS at the Ayr Campus graduation ceremony on Friday 28th June 2019 at Troon Concert Hall.

Founded in 1988 by husband and wife Bill and Cath Costley, Costley & Costley are a leading player in the Ayrshire hospitality industry. With a portfolio that boasts nine hotels and inns including the flagship Lochgreen House in Troon, Brig o’ Doon in Alloway and Ellisland in Ayr, Bill’s role as Chairman has ensured tourism in Ayrshire has set the bar high for the rest of Scotland.

His outstanding contribution to the hospitality industry has been recognised by the honorary doctorate from UWS which Bill can add to the list of accolades to his name including a Lifetime Achievement award from the Scottish Licence Trade Association and the Gordon & MacPhail Award for Success in Business at the Scottish Bar and Pub Awards in 2017. 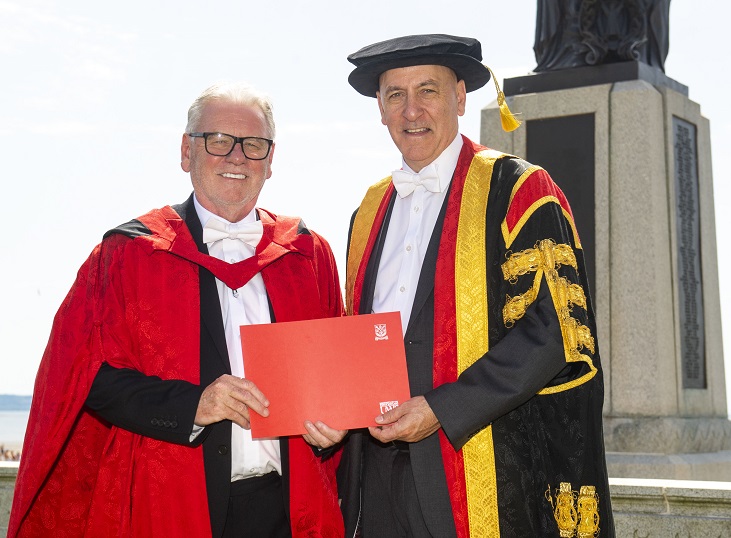 In addition to the portfolio of hotels and inns across Ayrshire, the Costley’s expanded into ice-cream in 2012, opening the hugely successful Costley’s Patisserie & Chocolatier.

Commenting on his Honorary Doctorate from UWS, Bill Costley said: “I feel both proud and humbled by this amazing honour and would like to thank Professor Mahoney and his colleagues at UWS for considering me. I admire the dedication and encouragement the university gives its students to become professionals in their chosen career and the lifelong work ethic that is necessary for success. To be given this honour means a great deal to me and my family.”

Professor Craig Mahoney Principal and Vice-Chancellor, UWS said: “Bill’s eagerness to nurture talent, develop new ideas and build on skillsets ensures Ayrshire is at the forefront of the hospitality industry. This drive to constantly challenge the status quo and become the best aligns closely with the ethos we pride ourselves on at UWS."

“Bill is an outstanding entrepreneurial role model for our students looking to enter the world of hospitality, or the wider world of business, and it is with great pleasure we present Bill with an honorary doctorate from UWS.”

Bill received his Honorary Doctorate at a ceremony alongside 160 graduates of UWS’ School of Business and Enterprise and School of Media, Culture and Society.