The latest event in University of the West of Scotland’s (UWS) Inspiring Women series brought together around 155 guests and a host of organisations involved in Scotland’s textile industry to celebrate Renfrewshire’s long history with weaving.

The morning session held at the University’s Paisley Campus on 27 September 2018 was delivered in partnership with the Tapestry of Renfrewshire. This arts initiative has taken the oldest known map of Renfrewshire - produced by Timothy Pont – and used it as the inspiration to create a tapestry to reflect the legacy of the textile industry across Renfrewshire.

Invited guests, which included around 60 year 3 and 4 pupils from schools local to Pont’s map of Renfrewshire, were given the opportunity to play their part in the creation of the Tapestry of Renfrewshire by adding a stitch to the artwork, creating their own Paisley pattern teardrop for inclusion in the main tapestry. Production of the final tapestry is expected to take until 2021, by which stage a total of 21 tapestry panels will have been completed.

The event at the University shone a light on the inspiring women – across generations – who played a pivotal role in developing the textiles that helped the town of Paisley grow in wealth and stature. Performances from arts company, Weaving Musical Threads, used spoken word to depict the work and successes of Paisley’s Mill Girls, who famously held mill owners to account, demanding better pay and working conditions in recognition of their skills. 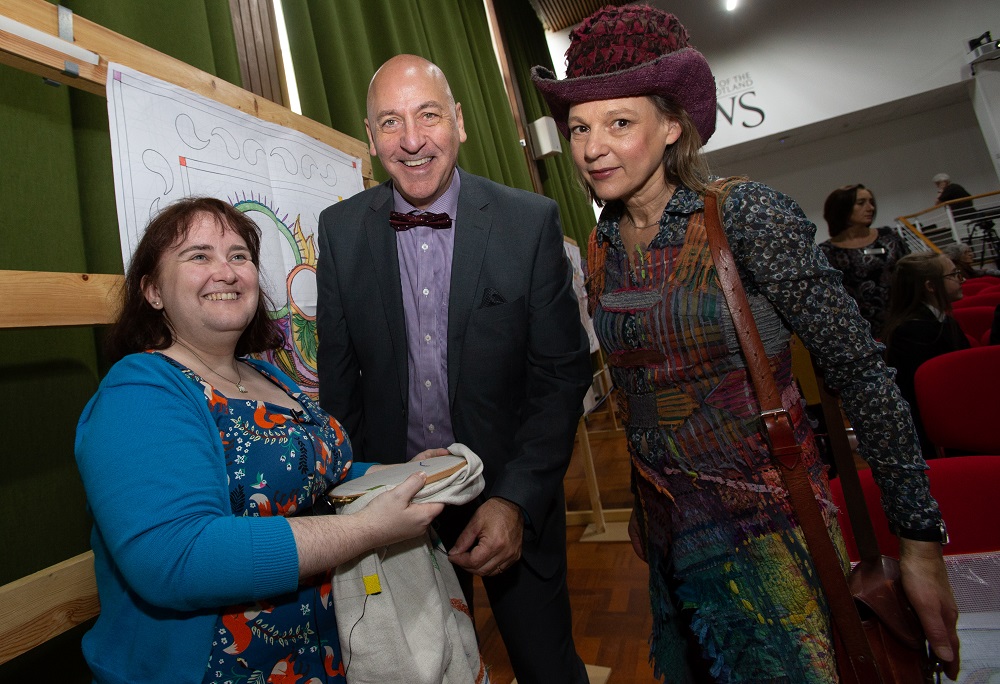 Continuing the inspiring women theme, the keynote speech was given by renowned textile artist and designer Jilli Blackwood, who gained a first-class honours degree at Glasgow School of Art. Jilli has gone on to garner international recognition for her wall hangings and ‘Art to Wear’ works held in private, corporate and museum collections around the world. She spent time as artist-in-residence at the National Museums of Scotland in Edinburgh and was the designer of Team Scotland’s Commonwealth Games 2014 Opening Ceremony uniforms.

Guests had the opportunity to take part in a diverse range of interactive workshops including traditional spinning and weaving with the West of Scotland Guild of Spinners, Weavers and Dyers; as well as the chance to learn from students and Academics at UWS’ School of Computing, Engineering and Physical Sciences about how digital technologies can transform the modern-day textile industry.

Also on show at the event were five of the tapestry panels used to create the BBC’s 2018 FIFA World Cup trailer, further highlighting the possibilities of combining traditional textiles with digital technology to create highly engaging content.

The event marked another textile art initiative UWS has been involved in, with the University one of the driving forces behind the highly-innovative Paisley Pearls digital art project, which transformed the traditional Paisley pattern for the digital age.

Professor Craig Mahoney, Principal & Vice-Chancellor of UWS, said: “We’re thrilled at the success of our latest Inspiring Women event and I would like to thank the speakers for sharing their experiences of the textile industry with our guests.

“Not only did it highlight the pivotal role of women in Scotland’s past and present textile industry, but it also revealed the lasting effect UWS’ home town of Paisley, and the wider Renfrewshire area, has had on the art form over the years."

“We’re extremely proud of the heritage between UWS and its original founding institution of 1897, the former Paisley Technical College and School of Art, and the weaving and thread industry of the town. We’re excited to continue to play a role in shaping the evolution of textile production through our academic work which supports and recognises the positive impact digital technology is having on the modern textile industry. "

“We hope that everyone who attended the Inspiring Women event, and in particular the school pupils who represent Scotland’s next generation, have been inspired by our fantastic speakers. This event aimed to instil in our guests a sense of pride around Renfrewshire’s role in creating an artistic legacy that has evolved through generations whilst also creating an excitement for the future of the textile industry in both physical and digital forms.”