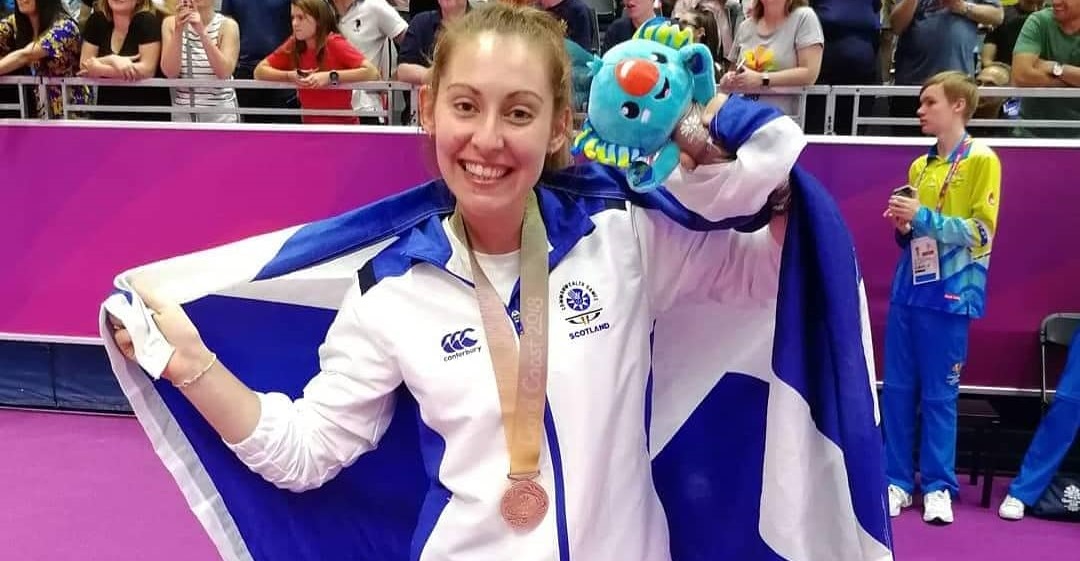 UWS Creative Industries graduate Kirsty Gilmour (pictured above) won a medal for the second successive games, taking bronze in the women’s singles badminton with a 21-11, 21-16 win over Canada’s Michelle Li in the bronze medal match.

In the pool, Team UWS Swimmer Craig McNally reached the final of both the individual 50m and 200m backstroke, finishing seventh in both finals – a huge achievement. He also led off the Team Scotland 4x100m medley relay team which just missed out on a medal, finishing fourth in the final swimming event of the games.

UWS Winning Students Scholar Karen Darke, who in 2016 added Paralympic Gold Medallist to her impressive list of sporting achievements just missed out on a medal at Gold Coast 2018, finishing fourth in the para-triathlon event.

Former UWS student Callum Hawkins was hugely unfortunate to miss out on a what looked a certain gold medal in the men’s marathon. Callum had a clear lead entering the closing stages before he was overcome by exhaustion and the extreme heat – which caused nearly a third of the field to drop out - just 2km from the finish of the race. Fortunately Callum was released from hospital and rejoined the team at the athletes’ village the following day.

Team UWS athletes, and UWS Sport Scholars, Jonathan Bunyan and Alasdair Fraser played a key role with Team Scotland basketball who were a revelation in the tournament, finishing fourth in Scotland’s best-ever result in the event, and only missing out on a medal in a 79-69 defeat to New Zealand in the bronze medal match.

In men’s hockey, the Scotland squad featured three UWS graduates, as the team recorded their highest placing at a Commonwealth Games, finishing fifth. David Forsyth and Lee Morton were in action for Scotland, while Alan Forsyth (pictured) was the team’s top scorer in the tournament with four goals.

“We take great pride in supporting student-athletes in pursuit of their aspirations at UWS and it has been inspiring to see our students and alumni compete with distinction at the Gold Coast Games.”

Team Scotland’s netballers, featuring several members of the UWS Sirens squad, also scored their best-ever finish at a Commonwealth Games, placing ninth after a 50-48 win over Barbados in their final match.