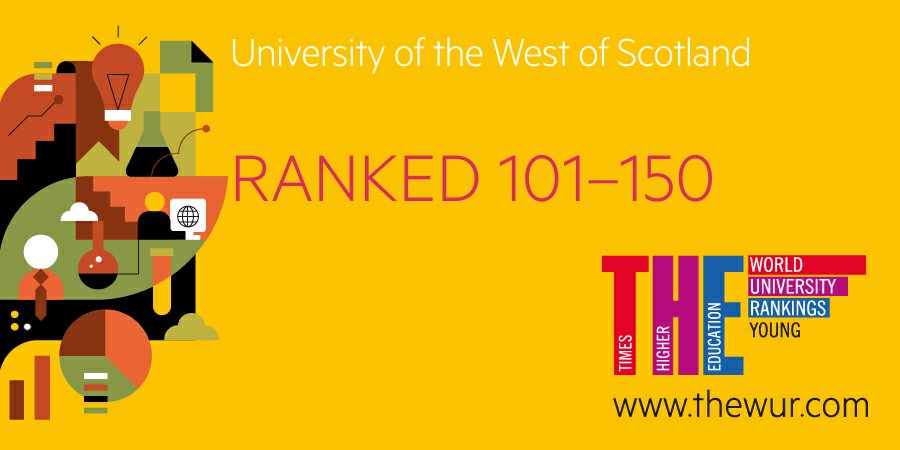 UWS has been ranked in the world’s top 150 young universities by Times Higher Education (THE). This year, we have significantly improved our position to reach the top 101-150 in the world, up from the 151-200 division, in THE's Young University Rankings.

The Young University Rankings are for universities established less than 50 years ago, and are designed to demonstrate the impact on the world stage of universities in years, rather than centuries, highlighting future rising stars.

The prestigious table applies the same 13 rigorous performance indicators as the overall THE World University Rankings - with young universities measured across their teaching, research, citations (research influence), international outlook and industry income. However, the methodology has been recalibrated to reflect the special characteristics of younger universities.

The recognition comes as the University prepares to launch its brand new state-of-the-art £110 million campus in Lanarkshire, which opens its doors to all students for the first time in September.

This is a wonderful achievement for University of the West of Scotland and truly reflects the hard work and effort of colleagues across our five campuses and the tremendous input from our partners and stakeholders.

The University continues to push forward in all areas, growing and evolving to meet the needs of our students and industry partners. In addition to opening our new campus in Lanarkshire, we’ve also launched a London campus, which will significantly increase our UK and international reach.

In addition to growing its international footprint, UWS is also bucking the national trend for domestic application rates, as prospective students recognise the flexible, modern teaching environment delivered by the University.

Our retention rates are higher than ever before, and improving, thanks to the student-centred, personalised learning and teaching experience approach, which is absolutely central to our purpose as a university. UWS graduates are increasingly finding positive and long-term employment in their chosen industries as the University continues to develop and expand its offering to equip students with the skills necessary to enter the world of work.

Find out more about the Times Higher Education (THE) Young University Ranking (2018).