Dr Stephen Breslin has received an Honorary Doctorate from University of the West of Scotland (UWS) at its Lanarkshire Campus graduation ceremony (Tuesday 25th June 2019) at the Town House, Hamilton.

Chief Executive of Glasgow Science Centre, Dr Stephen Breslin, is an advocate of innovative learning and his Honorary Doctorate from the University recognises the significant contribution he has made to raise the profile of science, engineering and technology in the city of Glasgow and beyond, opening this up to a wide range of audiences and age groups.

Since his appointment in 2012, the Science Centre has grown from strength to strength becoming a highly regarded destination, attracting 350,000 people through its doors every year. Prior to this, Stephen was Chief Executive of Futurelab Education, a think tank for innovative approaches to teaching and learning in schools.

Dr Breslin’s expertise ties in well with UWS’ focus on championing STEM subjects (science, technology, engineering and maths) as illustrated at the recent UWS Mission Discovery 2019 event held at the university in June as part of its sector-leading partnership with the International Space School Education Trust (ISSET). The event gave school children and members of the public the chance to hear from NASA astronaut, Dr Michael Foale (CBE), the most experienced British-born astronaut in the history of human spaceflight.

“I am absolutely thrilled to receive this award, and I feel extremely honoured and privileged. I have always held UWS in the highest regard, and it is great to see how the university is continuing to develop.” 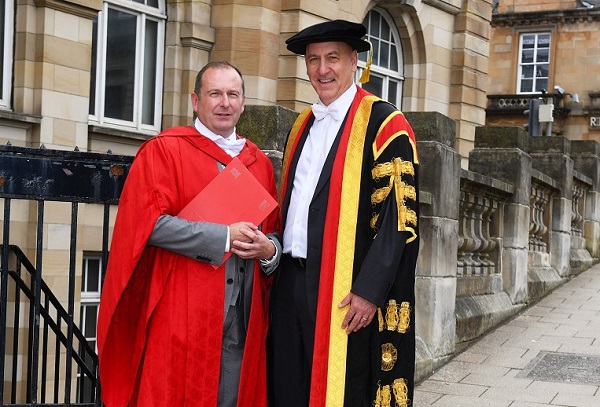 Professor Craig Mahoney, Principal and Vice Chancellor of UWS said: “We are delighted to have presented Dr Stephen Breslin with an Honorary Doctorate. He describes himself as having a combined passion for science, technology and education and his values fit closely with the values we uphold at UWS.

“This award recognises the significant contribution Dr Breslin has made to ensure science, engineering and technology are accessible to the people of Glasgow, and further afield, and we are delighted to be able to celebrate this huge achievement with him.”

Dr Breslin has had a rich career including a role as an engineering consultant with the Royal Navy, as well as working as a commercial software engineer and then CEO of the then Kelvin Institute in Glasgow. In this capacity he worked with Scottish universities on the commercialisation of intellectual property in the areas of photonics, software, biotech and renewable energy.

Dr Breslin received his Honorary Doctorate at a ceremony alongside 120 graduates of UWS’ School of Business and Enterprise.