UWS has partnered with Scotland's national football stadium, Hampden Park to deliver a series of interactive sessions on the human body to Mount Florida Primary pupils.

To help support the primary six class in their classroom-based learning, UWS’ Dr Chris Easton, a Reader in Exercise Physiology in the School of Health and Life Sciences and his colleagues, Lecturer Dr Stephanie Valentin and Interim Assistant Dean (Education), Professor Fiona Henriquez, delivered a four-part series of talks focusing on the heart, lungs, muscles and skeletal system, and microbes and bacteria. 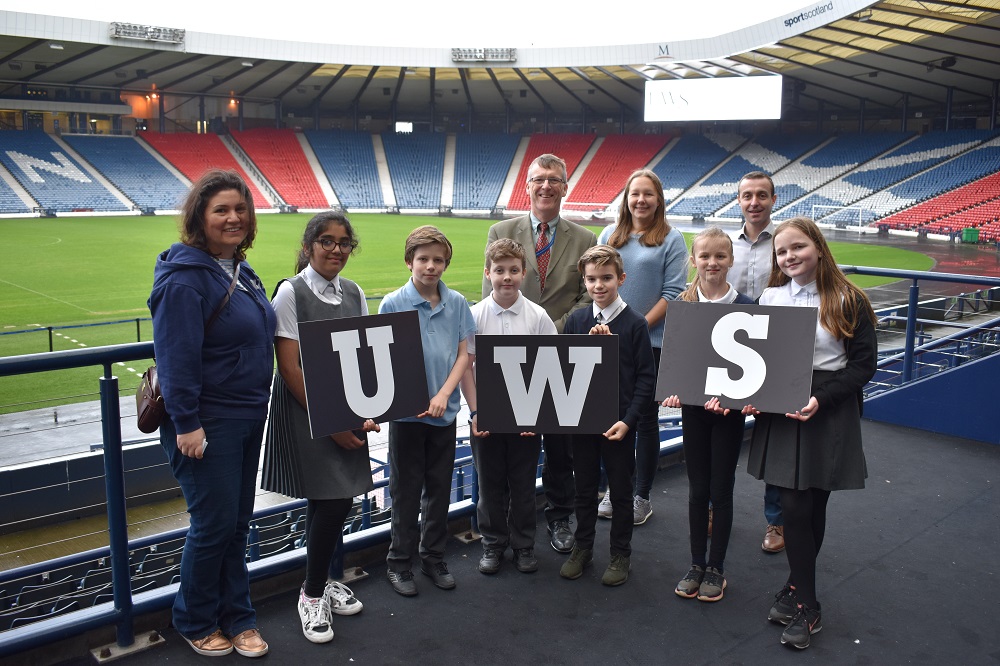 The sessions took place at Hampden Park allowing plenty of space for learning. Dr Easton carried out sessions on the heart and lungs where pupils were given heart rate monitors from UWS’ labs to record their pulses during exercise and a spirometer to read their lung capacity.

Dr Easton went one step further, using the indoor pitch at Hampden to involve the pupils in a visual representation of the cardiovascular system. Here, the children took part in a red blood cell relay race, holding red and blue balloons to represent deoxygenated and oxygenated blood as it enters and leaves the heart via veins and arteries.

Week three was delivered by Dr Stephanie Valentin who focussed on muscles and the skeletal system. Given the sessions took place at Hampden, a football flavour was always on the cards. Special technology in the goals recorded how hard pupils were able to kick footballs, helping them to gain a clearer understanding of muscles and the skeletal system in action and how the two systems work in tandem to allow movement.

Dr Valentin brought jump mats from UWS so pupils could record how high they jumped and skeletons to familiarise them with the different bones in the body.

The fourth and final session was delivered by Parasitology specialist Professor Fiona Henriquez who spoke to the children about the influence microbes can have on health. Theory was put into practice with a game of ‘Infection Tig’ where children were split into groups of viruses and healthy cells, with the viruses trying to catch the healthy cells.

“By giving the children practical, hands-on experience of complicated systems such as the human body, they have a visual representation which may just stick in their minds longer than a diagram in a textbook."

Dr Easton said: “Our sessions at Hampden Park have been a lot of fun and not just for the pupils. Classroom-based learning is incredibly important but sometimes it’s good to shake things up and learn in a new environment.

“By giving the children practical, hands-on experience of complicated systems such as the human body, they have a visual representation which may just stick in their minds longer than a diagram in a textbook. Not to mention, with the recent reports of increased screen time and decreased physical activity it’s brilliant to see the children running about and keeping active whilst also learning – and what better place to do this than in Scotland’s national stadium?”

Peter Dallas, Managing Director of Hampden Park Limited said: “This partnership with UWS and our local school, Mount Florida Primary, has been a great success. It was a pleasure to see the pupils engaging in each session with such enthusiasm. We are privileged to have helped P6 enjoy learning from the experts at UWS. The excitement of coming to Hampden for their lessons, combined with the fun generated by UWS’ team, has left a positive impact with the class which they’ll remember for a long time to come.”

The interactive sessions culminated with a visit to the Scottish Football Museum where pupils had the chance to see the exhibits and learn more about Scotland’s impressive football heritage.