UWS Biomedical Science graduate Kirsty McCallum is carrying out PhD research to solve a mystery. Along with colleagues in Ireland, and Northern Ireland, she is trying to find out why chronic obstructive pulmonary disease (COPD) – the third biggest cause of death in the world after heart disease and cancer – is so prevalent in three, rural populations.

In 2011 the annual economic burden of COPD across the EU was estimated at approximately €141.4 billion.

Working as part of the BREATH (Border and Regions Airways Training Hub) project – a €7.7 million EU-funded initiative run between UWS, Queen’s University Belfast, and the Dundalk Institute of Technology – multi-disciplinary researchers hope to find ways to better understand and alleviate the impact of lung disease.

Kirsty says: “I cannot speak highly enough of the quality of teaching at UWS. My lecturers motivated me to work hard and become more confident in my abilities.”

“During my Biomedical Science degree I undertook a placement as a laboratory technician which developed my independent thinking skills and intuition, both of which are incredibly important to my current work. 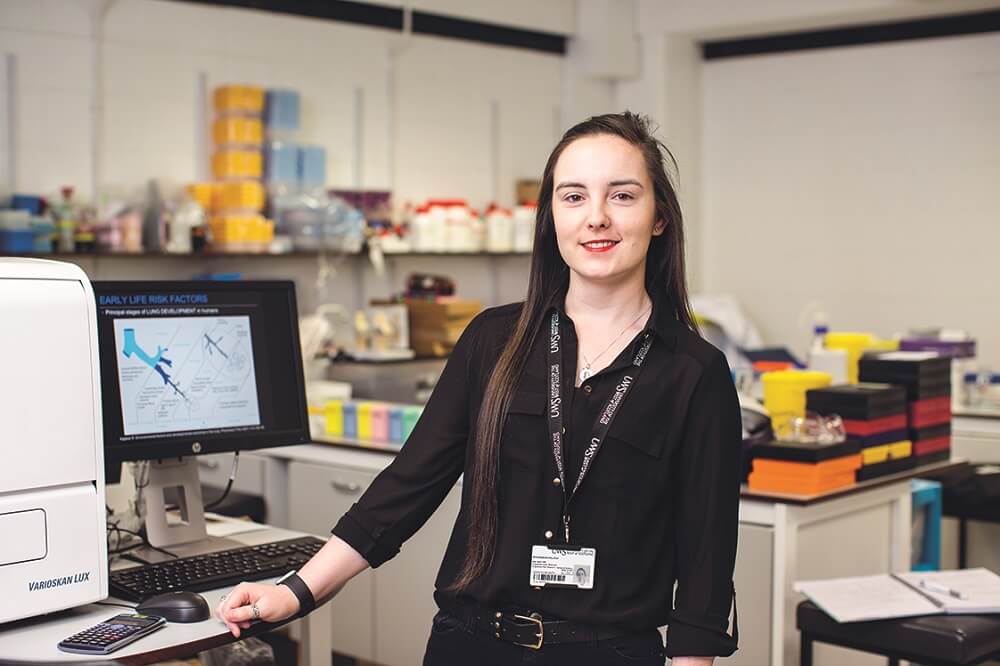 “There are five UWS PhD students working on the project. Our research is focused on the musculoskeletal science of COPD.”

As part of Kirsty’s research, she is currently studying tissue samples from COPD sufferers, looking for markers of accelerated ageing.

She adds: “The mystery at the heart of the research is that the three areas with the highest incidence of COPD are semi-rural communities, in Ireland, Northern Ireland, and south-west Scotland.”

“The mystery at the heart of the research is that the three areas with the highest incidence of COPD are semi-rural communities, in Ireland, Northern Ireland, and south-west Scotland.”

Ayrshire & Arran and Dumfries & Galloway see the highest number of COPD-related hospital admissions in the UK.

Kirsty adds: “You would expect more COPD cases in polluted, urban areas. Yet the hot-spot areas are rural. The BREATH study hopes to understand why that is.”

The UWS team is also conducting public engagement work in the affected communities, trying to give the public a better understanding of COPD and lung health.

“Together, we hope to develop new and improved treatments for this silent killer, as well as helping to prevent COPD through public awareness.”

Find out more about our BSc (Hons) Biomedical Science

Learn more about other Undergraduate Courses